The calf product is offered in the spring and covers the price risk a cow-calf producer faces selling calves in the September to February markets.

* Policies nearing the end of a blackout period are not guaranteed four weeks of claim. Producers can reference the Calendar of Insurance to ensure they select a policy with the appropriate claim window.

LPI – Calf program is market-driven, using several factors to forecast a future calf price. During the policy purchase period, coverage offered is calculated on Tuesdays, Wednesdays and Thursdays using market data from each given day.

1. Chicago Mercantile Exchange (CME) feeder cattle futures
The nearby futures data for each policy length is used to calculate a forward U.S. price of feeder cattle.

4. Feeder to calf spread
A spread is calculated by subtracting the feeder price from the calf price. The current spread is compared to the five-year-average spread for the policy length being purchased.

By considering each of these factors, producers have market-driven, forward-price coverage to help manage the risk of marketing calves September through February.

The LPI-Calf program creates a settlement index based on weekly data collected from from electronic and auction market sales across western Canada. From this data, a settlement index is made publicly available on the following Monday (Tuesday when Monday is a statutory holiday).

Example: Calf Purchase
Doug has 150 calves that he is going to Market in November, they will average 650lbs. 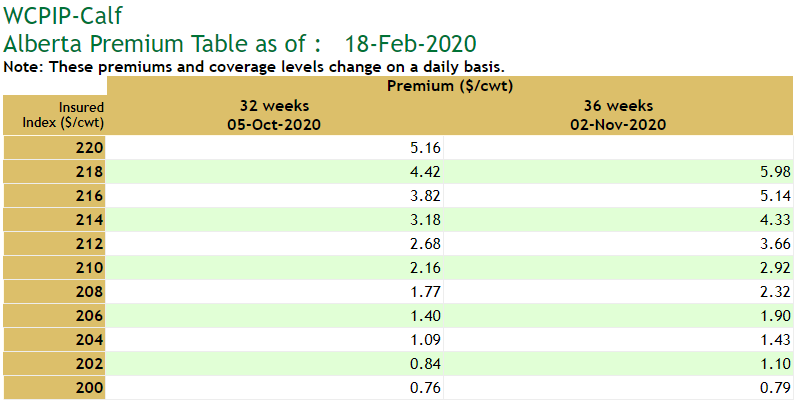 Example: Calf Settlement
Doug has coverage of $218/cwt on his calves for November 2, 2020. As Doug’s claim window draws near, he begins to watch the settlement indexes. During Doug’s four week claim window of October 12 – November 2; the settlement price dropped below his coverage price for all four weeks in his window. Doug felt prices would continue to come down during his window, so he decided to claim a portion of his policy on October 26 and let the remaining amount settle on November 2. If the settlements within his claim window were higher than his insured index of $218/cwt, there would be no payout.

Why are calf policies not sold year-round?

Historically, the volume of calves sold outside of the September to February time frame has been too low to provide accurate market data that is needed to generate coverage and premium levels. Calf policies are available to purchase from February to June.